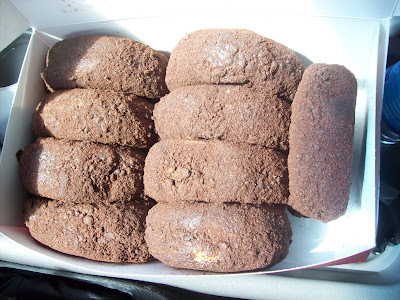 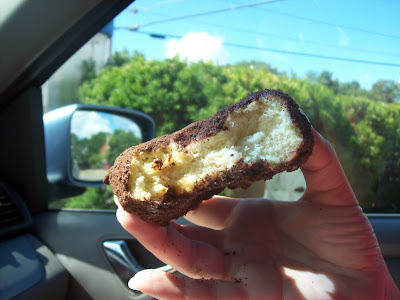 
(readers, cue  The Jesus and Mary Chain - Just Like Honey) (clicking on link should open YouTube in a new browser tab so you can hear my selected audio track playing, but you will have to click back on this tab to return)
This day's travels took me to Mansfield MA.
Honey Dew Donuts is a New England doughnut chain.  Most of the locations seem to be in MA and RI.  They are a great option to Dunkin'.  The waitstaff is super friendly and has been the same for years.  They seem to be open regular doughnut shop hours.  They do have a drive through window.
Back in the day, I used to work in Mansfield.  We used to get doughnuts some mornings and one day my co-worker Don came back with a few of a doughnut called a "Zachary".  I have gone to other Honey Dew locations and asked for "Zacharies" and got some seriously weird stares back. Apparently, this is THE ONLY location that makes this particular doughnut.  It looks like there are some other location specific donuts, a "Blake" and another whose name I forget.  Looking around the Honey Dew website, I noticed that Mansfield is their original location.  They do have a bakery in the back of this location.  I have been told that the donut maker named these special doughnuts after his kids.
Kids, your father is a donut genius.  Trans-fat free I may add.

The Zachary-  Make the softest honey-dipped doughnut you can. While the donut is still glistening in the honey-dipping nectar, take said don't and put it into a tub of cocoa powder (or something like that along with magical pixie dust).  Immediately serve.  Cocoa powder type stuff should be damp and adhered to every single crevice of said donut.  The donut becomes so large having soaked up magical honey-dipping nectar that it is not possible to fit a dozen in a dozen sized box.  See the heavenly light emitted by the donuts in the first picture.
I have been disappointed on one visit.  This disappointment stemmed from the fact that these sell very quickly and getting there after 10AM quickly decreases your chances  more than one or two (or in my case a dozen).
I have been very happy most every other time as I got there early and was able to get what I wanted in the quantity that I wanted.
Other times, I have been blessed by an angel. Sue is her name.  I had got there late and the Zachary count was low.  I took what she had and was trying to figure out what other donuts I would have to settle for.  I mentioned that I traveled over 45 minutes to get Zacharies.  She offered to make them fresh out of the honey-dipped that she had, if I was willing to wait.
I was traveling out of my way every two weeks there for a while, to the point that they knew what I wanted as soon as I came through the door.  I have cut back a bunch, especially as my travels have not taken me to Mansfield as much lately.  I went recently for the first time this summer with YM, K and Taters.
They only had 4.  My donut angel came out of the back and created a bit of heaven on Earth for me.
I waked out with a dozen.  They did not last a day.
Go to Mansfield. Eat a Zachary. Become a believer.

Posted by Mario Buttali (no relation to the famous chef) at 9:45 PM

Bring some to Jan. He needs to put some weight back on.

The coating on a Zachary is crumbled day-old chocolate donuts. Zachary donuts are the best in the world.

"It looks like there are some other location specific donuts, a 'Blake' and another whose name I forget."

It's the "Jessica" donut.

Mario Buttali (no relation to the famous chef)
I'm a nerd interested and motivated by the hunt for and reward of regional food, ethnic food and food-like substances. You can blame this blog on my moral compass, gambling adviser and consiglieri, Edzo. He said I needed an outlet. See my Favorite Music. I listen to WMBR/WZBC/WBUR/WGBH radio. Oh yeah, I'm an atheist (despite the title) not that I use that description as a primary identifier. And NO relation to the famous chef. And I've been told that you could stack a tray on my butt.

Links you should check out